The concept behind female genital piercings (as with those for men) is toenhance. The common placements as described below do not prevent sexual activities; they are meant to stimulate and arouse. These enhancements are also placed to call attention to the ornamented areas and foster beauty, appreciation, and enjoyment.

Unfortunately for us, our culture does not support genital pride. As a result, many of my female clients do not even know what the particulars of their private parts are called. Many women come to see me for genital piercings requesting “a clit piercing.” When they are shown a photograph of where that is located they shout, “Oh, No! Not there!” Sometimes they mean inner or outer labia, other times they desire a clitoral hood piercing.

Contrary to what most of the uninitiated would think, genital piercing is not particularly painful (at least if I do it for you). The physical reality is brief and relatively or virtually painless. Many piercees often favorably compare genital placements to the ear lobe piercing. The notable exception would be the serious and very rare clitoris piercing (rather than hood piercing).

This is about pleasure, stimulation, and celebrating the body. Though, naturally, during healing piercees must engage in safer sex and avoid sharing bodily fluids. Even if you are in a monogamous relationship, latex barriers must be used, including for oral contact, during the entire initial healing. See the Aftercare Guidelines for Body Piercings for complete information.

There is no requirement for abstinence during healing, but you must be hygienic, and ease up or stop (for the time being), if you experience discomfort or pain. In fact, the initial hypersensitivity that often accompanies a fresh piercing can make for interesting and even enlightening experiences.

For piercing details and 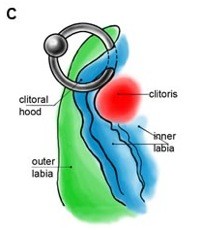 Correctly placed VCH piercing at the natural apex of the hood.This allows for maximum stimulation because as much of the jewelry is in contact with as much of the clitoris as possible.

Only a trained and highly skilled piercer will get this placed properly!

The HCH is a piercing done primarily for aesthetic purposes. In order for it to produce added sensation, it needs to be placed on a woman whose clitoris is somewhat exposed, and situated so that the bead falls directly on the clitoris. Also, if the woman is not built fairly symetrically, the ring will have a tendency to lean or twist to one side.

The majority of women are constructed in such a way that the hood covers the clitoris. Therefore, the jewelry in an HCH rests atop the hood, and isn’t nearly as pleasurable as a piece of jewelry that comes into direct contact with the clitoris (such as the VCH). There needs to be sufficient tissue in a configuration with a “hill” in this area, rather than a “valley.”

They can be very attractive, and some women who are anatomically suited will opt for this over other placements, because they like the look. A genital piercing can be visually delightful even if it is not placed for direct action.

Initial jewelry is usually a ring or circular barbell in 14 or 12 gauge. Care must be taken to check the vascularity of the region (for visible blood vessels), and to be sure the tissue pulls away from the nerve bundle of the clitoris.

FOR APPOINTMENTS PLEASE REFER TO 03332999499 THIS IS APPOINTMENT ONLY PROCEDURE.

This site uses Akismet to reduce spam. Learn how your comment data is processed.